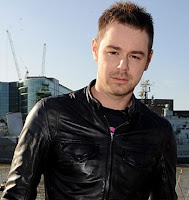 Danny Dyer has said that he has not ruled out the possibility of starring in EastEnders in the future.
The 31-year-old movie star was first linked to the soap in March, but admitted that he got "cold feet" after holding meetings with the show's producers.
"You know what, I was thinking about doing [EastEnders], but it just came at the wrong time for me," he told DS. "I'm very flattered that the BBC came to me and put the idea to me. But at the same time, I've got four movies coming out this year and unfortunately it's the wrong time for me to do it.
"The BBC do churn out some good talent on that show and I respect the actors that are in it because it's a really fast process."
When asked if there is any chance of him starring in the BBC show in the future, he answered: "Never say never."
Last month, however, a show source echoed their confusion over the situation over Dyer. They told DS at the time: "Everyone's more than a little confused. One of Danny's people actually called to arrange a meeting with John [Yorke] - which he happily went to - and the next thing, Danny's quoted as saying that producers want him to 'save' the programme."
They added: "EastEnders is in good form at the moment and certainly doesn't need rescuing!
Everyone's quite flattered he apparently likes the show so much, though - and he'd certainly set a few hearts fluttering on set."
Dyer's big screen credits include Human Traffic, The Football Factory and upcoming zombie comedy Doghouse.
Source - Digital Spy
Email Post