Poor Garry. He never has much luck in the love department, does he?

His ex-wife Lynne Slater had an affair with Beppe di Marco which came out in the wash on his wedding day, before she went on to have another brief fling with her ex-fiancé Jason James. Garry then joined in with the promiscuity by having some fun with Laura Beale.

Laura fell pregnant with what she believed to be Garry's baby, but it soon transpired that Bobby wasn't Garry's - Ian was the daddy. Lynne wasn't prepared to forgive Garry so easily, so he evened up the score by having it off with his wife's sister Belinda Peacock. Lynne soon forgave him and fell pregnant herself. A tragic accident, however, resulted in their baby dying and Lynne surviving. Unable to forgive Garry, Lynne fled Walford.

Since Lynne's departure, Garry's been floating around Walford with his best mate Minty like a pair of lost sheep. However, Garry soon managed to woo Dawn and it seemed like they were going to live happily ever after... Until Dawn decided to chat on him with his good friend and boss Phil Mitchell.

Yep, Minty's stunned next week when he walks into the Arches to see evidence that Phil's romping with Dawn in the Arches. Caught in an difficult situation, Minty's torn as to whether to tell Garry about Dawn's infidelity. Next fortnight, though, it looks like Garry's going to stumble upon the truth himself when he nearly walks in on Phil and Dawn after a quick session on the sofa in The Vic's living room.

As you can see from my pic below, Dawn's left in a slightly tricky situation as she hides half-naked behind a door. When you see the episode, you'll notice that Garry seems to lack any peripheral vision. 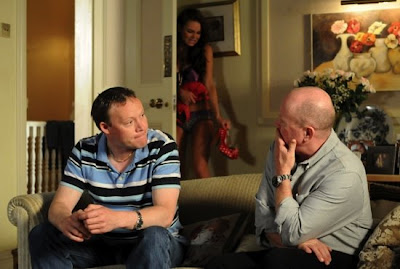 These scenes air on Tuesday 7 July on BBC One