Inside Soap magazine has revealed soapland's most-loved lineup of characters.

After a 10-week vote, Britain's favourite fictional drama queen, villain, landlady and bitch, among others, have been named, with EastEnders taking the top spot in half of the categories. Coronation Street have four favourites and Hollyoaks one. ITV rural drama Emmerdale, however, failed to top the votes in any category.

Speaking of her character's title, Barbara Windsor said: "I'm really thrilled, darling! What I love about Peggy is that it's so un-me! I loved doing those scenes where Peggy and Pat fought over Frank, it was terrific. But Peggy hasn't changed much since. I just did a scene where she's so up herself that she thinks she is Queen Victoria! I'm still enjoying every minute."

Jessie Wallace commented: "Considering I left EastEnders over three years ago it's great that Kat is still in people’s memories. Kat was such a fantastic character to play… Tony Jordan [former chief script writer] told me if Kat had stayed in Walford, she would have been a completely different character. After all she'd been through, she'd take off her face and just be a plain Jane. That would have been depressing, wouldn't it?" 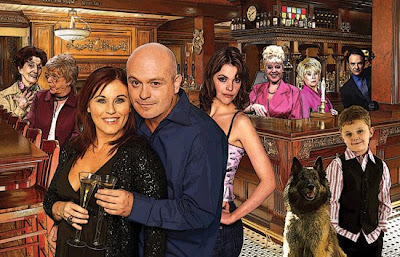