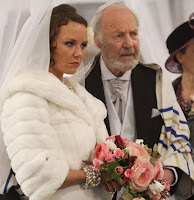 Veteran actor Harry Towb has died at the age of 83, it has been announced.
The Irish-born star passed away peacefully at his home in London on Friday following a short battle with cancer, his family confirmed in a statement.
Towb is survived by his wife Diana Hoddinott, children Emily, Daniel and Joshua, and three granddaughters.
Paying tribute to his father yesterday, Joshua commented: "He loved his family very much. But he never liked not to be working. He worked all the way through his illness as long as he could, right up until a few months ago."
Towb pursued a stage career after growing up in Belfast, working with various theatre groups before moving to England in the 1950s. Among many other plays, he appeared in Brighton Beach Memoirs, Little Shop Of Horrors and Death Of A Salesman.
He also secured various television roles throughout his career, including appearances in The Avengers, Heartbeat, Casualty and The Bill.
Most recently, he was seen in the BBC One soap opera EastEnders, playing Janine Butcher's fiancé David for a two-episode stint in December last year.
Source - Digital Spy
Email Post