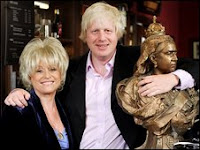 Mayor of London Boris Johnson is to make a small cameo appearance in BBC One's flagship soap EastEnders.
The 45-year-old who assumed the mayoral office on May 4, 2008 filmed a short scene with the show's matriarch Barbara Windsor on Friday for an episode to air in a few months' time.
When The Queen Vic's landlady Peggy Mitchell discovers that the Mayor is paying a visit to Walford, she spends an entire morning searching for him. However, she's frustrated when she returns home having failed in her mission.
She goes on to rant to the locals about what she'd say to him if they ever came face-to-face but she's taken aback when he wanders into the pub unannounced. Captivated by his presence, Peggy turns on the charm and begins flirting.
A recent storyline saw Peggy run as an independent candidate for the local council elections. However, she pulled out of the race for office when her husband Archie piled on the pressure for her to stand down ahead of their wedding.
Speaking of his cameo, Johnson said: "EastEnders is a true London icon and I was delighted to highlight to its huge audience the part the mayoralty plays in the city's rich tapestry."
He added: "It was, of course, a tremendous honour to step inside that most venerable of London landmarks, The Queen Vic, and share a scene with another of the capital's icons, the fabulous Barbara Windsor."
Of Johnson's cameo, executive producer Diederick Santer commented: "EastEnders has always had a good relationship with the Mayor's office, and we are delighted that Boris Johnson is coming to spend some time with us. EastEnders does its best to reflect contemporary London, and we hope that meeting the Mayor will help us stay ahead with the latest London stories, policies and developments."
He continued: "We couldn't let the visit pass without the Mayor entering London's most famous pub, The Queen Vic, and meeting its formidable and politically-active landlady Peggy Mitchell."

Johnson's scene will air in the autumn. 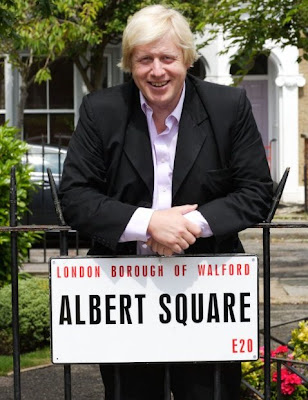