This is the first picture of Danniella Westbrook on the set of EastEnders since she returned to the soap last month as original Mitchell sister Sam.

In April, it was announced that Westbrook was to reprise her role as Sam in the summer.

As a suspect in Den Watts's murder trial, Sam was last seen fleeing the country to live in Brazil. However, she makes a comeback to the Square in September, much to the shock of her family and the locals.

What has caused her to return to Walford? And what will her ex-husband Ricky say when she walks back into his life? And why is she wearing an engagement/wedding ring?

Speaking to DS earlier this year, the soap's executive producer Diederick Santer said: "The biggest thing we've got to get over, though, is the fact she's on the run in Brazil. We'll definitely get around that one - we've got it all worked out…" 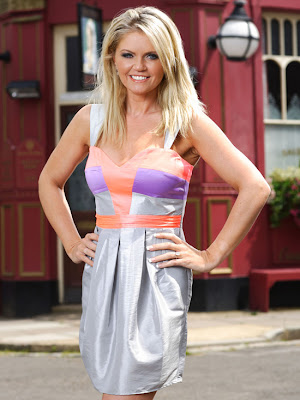