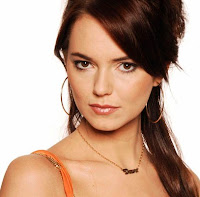 Kara Tointon has said she hopes her EastEnders character won't be killed off.

Her character Dawn Swann has been pregnant, abducted and engaged since joining the show in 2005 and her final scenes will be shown in August.
"I'm hoping for a happy ending rather than being killed off," she told this month's FHM magazine. "I like the idea of being able to come back at some point."
She continued: "I'm a real mixture of emotions. I'm very apprehensive. In a funny sort of way, when you're on a show like EastEnders, you're living a second life, you have a second family and you go to work in this little cocoon.
"I'm nervous, but also excited to do other things. I always planned to do two years at EastEnders, so to actually do four was great. It's time to move on, though. They haven't told me too much about what's going to happen."
Speaking about her on-screen brother and real-life love, Joe Swash, she said: "I suppose you could think going out with your TV brother is a bit weird.

"We didn't say anything for a while as we wanted to see what would happen. Otherwise you end up in the situation where you talk about it and then something happens and you're not together. Also, for some reason, I thought work would be really angry with me."
Source - Whats On Tv
Email Post
Labels: Dawn Garry