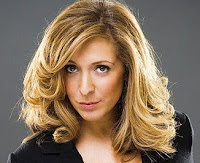 Former EastEnders actress Tracy-Ann Oberman has revealed that she would love to finish off her character's storyline.

The 39-year-old, who played cold-blooded murderer Chrissie Watts for a year-and-a-half, was written out of the BBC soap in December 2005 when she was left languishing in prison for killing her husband Den.
Due to the unavailability of Oberman and the other actors involved Michelle Ryan (Zoe Slater) and Kim Medcalf (Sam Mitchell) Den's murder trial was shelved and Chrissie was last seen returning to her cell after a visit from Jake Moon.

With no resolve to Chrissie's story, Oberman hopes to one day discover what happened to her Walford counterpart.

Speaking exclusively to DS, she enthused: "I'd love to finish off Chrissie's storyline because I love the character and I do feel that she was left in limbo. To know what happened to her would be great. Even if she went back to say goodbye or wanted to make peace with Sam. Or maybe we could see her in prison?"

She continued: "I would have loved to have wrapped [the story] up. She just told Jake [Moon] not to wait for her because she realised she had to do her time. She'd have probably got well in with the Governor. I could imagine them having cosy dinners together. Probably the Jeffrey Archer of soapworld."

Chrissie's co-conspirator Sam Mitchell is due to return to the Square in September as the character's original actress Danniella Westbrook takes the reins from Medcalf.

A return for Chrissie, however, is not currently on the cards.

karen from ireland said…
Ah no ! Eastenders doesn't need to keep bringing back old characters and especially Chrissie - she did my head in ! The soap is strong enough as it is at the moment. Okay they made one big mistake this year by letting Lauren Crace leave but Santer has assembled a great cast of characters with Sam Womack and Rita etc.........and with Daniella coming back soon that's another female minx added in for good measure !

Ronnie (Sam Womack) rocks for me in Eastenders and she is a strong firey character. Santer doesn't need to bring back any other strong female characters. Leave it as it is please !
Friday, 24 July, 2009