Phil Daniels glad he was killed off 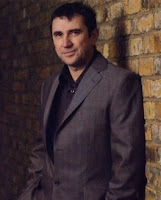 Phil Daniels is glad his EastEnders character was killed off.

The actor who played car lot boss Kevin Wicks in the BBC soap says he grew tired of a string of miserable storylines in the months leading up to his departure at the end of 2007.

He said: "Characters like mine, who start off happy-go-lucky can't succeed because 'EastEnders' doesn't really do light comedy. They've got nowhere to go.

"Inevatibly, Kevin ended up miserable, in a storyline dead-end. The only thing they could do in the end was kill him off. I was happy to be killed off."

The 50-year-old actor who can next be seen playing a police inspector in ITV's new 'Poirot' film 'Clocks' also claimed he preferred other soaps comic attitude to that of 'EastEnders'.

He added to Britain's Daily Mirror newspaper: "Other soaps are good at comedy but 'EastEnders' is too serious and arguably a bit worthy."

Phil joined the show in 2006, making his first appearance on-screen in February that year.

He announced his intention to leave in August 2007, and his character's death was screened on an episode broadcast on New Year's Day 2008.