Ryan "has lots of secrets" 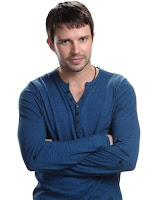 EastEnders newcomer Neil McDermott has teased that his Walford character "has lots of secrets".
The 28-year-old who plays Whitney Dean's half-brother Ryan revealed his true identity during last night's episode, much to their mother Debra's dismay.
However, McDermott insists that Ryan's identity isn't the only mystery surrounding his bad boy alter ego.
Speaking exclusively to DS, he explained: "He's very mysterious and he has lots of secrets that unfold as we go along. It's great for me to play as while we're going along, there's always something going on."
During yesterday evening's edition, Ryan tried to recover a knife from Debra's possession in the hope of destroying the salient piece of evidence that could be used against him. When it transpired that Ryan used the knife to kill an assailant, he maintained that he simply lashed out in self-defence.
Of Ryan's shady backstory, McDermott said: "I know that from a young age he just got involved with the wrong crowd. Ryan's not a really aggressive or violent man, but he's a thief. He ended up moving away from that, though. He'd love to live a normal life, but he's never had the opportunity to."
With a keen eye for the ladies, it's not long before Ryan sets his sights on Ronnie Mitchell.
He smiled: "It's definitely lust at the beginning. Obviously Ronnie has a lot of her own issues that Ryan doesn't know anything about. So he's trying to get to know her a little bit but she has ulterior motives, shall we say?"
Source - Digial Spy
Email Post
Labels: Ryan