Another shock pregnancy for 'EastEnders' 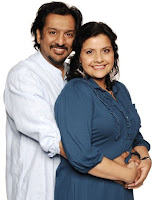 EastEnders' Zainab Masood gets the shock of her life at the end of the month when she discovers that she is pregnant.
The postmistress-turned-caterer, played by 40-year-old Nina Wadia, begins acting strangely in the weeks leading up to the surprise revelation, much to the concern of her friends and family.
However, the news stuns her husband Masood to the core as he had planned a round-the-world trip for them both now that their children have become adults.
A Walford source told DS: "Zainab starts suffering from dizzy spells and even Denise is concerned that she's unsteady on her feet. It's only when she's about to faint at mosque that her son Syed's fiancée Amira presses her for the truth that she finally comes clean."
They added: "Zainab's in her mid-40s and was looking forward to spending some quality time with Masood, but the news certainly throws a spanner in the works. Their plans to see the world instantly fall apart and she faces a dilemma as to what to do."
Zainab makes the shock discovery during the final week of August.
Walford's Heather Trott played by Cheryl Fergison is currently at the centre of a 'Who's the Daddy?' scandal after discovering that she was pregnant earlier in the year.
Source - Digital Spy
Email Post
Labels: Masood Zainab