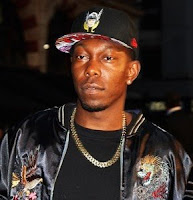 Dizzee Rascal has been invited to join the cast of 'EastEnders'.
The 'Bonkers' rapper has made no secret of his love for the London-based soap and the show's bosses say he would be welcome to make an appearance.
A BBC spokesperson said: "It's great to hear Dizzee Rascal is such a big 'EastEnders' fan he's a brilliant performer and a true eastender so he'd be very welcome to swing by The Queen Vic if he's ever in Walford."
However, she couldn't confirm whether the star - who was born in Bow, East London was definitely being offered a role.
She added: "It's not out of the question, but we've certainly not got anything sorted with regards to him joining the programme."
Earlier this week, Dizzee said he was desperate to star in 'EastEnders' and is keen to take up acting lessons.
He said: "'EastEnders' means a lot to me, because I'm from the East End.
"I watch whenever I can fit it in. It's best when I hear my music in the show's cafe, that gives me a buzz.
"I've thought about acting a couple of times. It is something I want to break into soon.
"It would be a natural progression. I could see myself on 'EastEnders' one day - they just need to offer me a role and I'm there."
Source - Virgin Media
Email Post