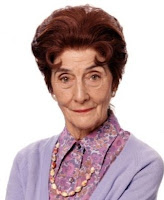 Veteran EastEnders star June Brown has admitted that she is hoping to find a boyfriend.
The 82-year-old actress, who plays Albert Square legend Dot Cotton, confirmed that she would like to date a middle-aged man but is not optimistic about her chances.
Brown told The Mirror: "I wouldn't mind a male companion. But I don't want an old male companion or a young one and a middle-aged one wouldn't fancy me."
The Walford favourite added that she is unfazed over her current role in the West End production of Calendar Girls, which sees her stripping off for her part as Jessie, aka Miss January.
She commented: "It doesn't worry me, it really doesn't... I wish I looked better, I'd be flaunting it if I did."
Brown's stage role sees her starring alongside Jerry Hall, Jill Halfpenny and Anita Dobson.
Source Digital Spy
Email Post
Labels: Dot