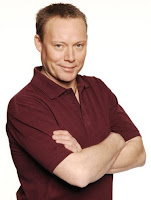 EastEnders actor Ricky Groves will appear on this year's Strictly Come Dancing, say reports.
According to The Sun, Groves, who plays Gary Hobbs, has signed up for the seventh series, which returns to BBC One next month.
"Ricky wants to try something new," said a source. "He's a massive fan of the show and couldn't wait to sign up."
Former soap star Natalie Cassidy has also been linked to the show. Groves's on-screen love interest Kara Tointon ruled out appearing on the ballroom contest yesterday.