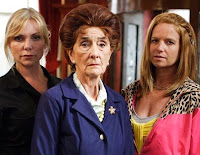 EastEnders is set to broadcast its first ever all-female three-handed episode on Tuesday.

The episode will see Ronnie, Bianca and Dot opening up to each other during a night in the Vic. They may seem an unlikely trio, but the women discover they have one thing in common, they all have some very big decisions to make.
EastEnders' executive producer Diederick Santer told the soap's official website: "Usually when we do a two-hander, we're playing out a story for two characters who are very close, but in this case, unusually, we're featuring characters who don't usually relate to one another.
"But that is what makes this episode all the more exciting and unique."

The episode airs on Tuesday 18 August on BBC One