Garry finds out about Dawn's Affair 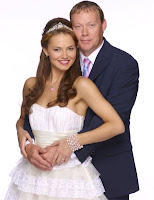 It is the day of Dawn and Garry's wedding but the bride is jilted after Garry finds out about her affair!
As Minty debates whether to tell his best mate that his fiancée had a fling with Phil, Dawn spills the beans to Shirley - Phil's ex!
"At the hen party, Shirley makes Dawn realise she's got to have a clean slate with Garry, so she sobers up and prepares to come clean," says Kara Tointon, who plays the bride-to-be.
"But when she gets home and sees him with Summer, she realises how amazing he is and can't face telling him."
However, Minty has other ideas.
When Dawn leaves, he finally tells Garry the terrible truth.
On the morning of the big day, heartbroken Garry still plans on going ahead with the ceremony and sailing off into the sunset with Dawn.
But as the wedding party sets off for the registry office, Garry leaps out of Phil's car and runs over to ask Dawn if she loves him.
"Dawn panics and thinks, 'Oh my God, someone's told him,'" explains Kara.
"She looks at Phil for his reaction. Garry loses it and punches Phil! It makes Dawn realise how much he cares."
With the wedding off, Garry is about to set sail on his boat alone, but Dawn races after him.

Will she convince him to start a new life away from Walford with her or have her hopes of a happy ending sunk?