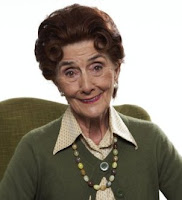 June Brown doesn't care how they write her 'EastEnders' alter-ego out of the soap.

The 82-year-old actress who plays Dot Cotton in the BBC show is taking a three-month break while she appears in West End show 'Calendar Girls' but has decided not to find out how writers will explain her absence.
She said: "Don't ask me how they've written Dot out. I'm not sure. I was trying to find out then I thought 'June, just forget about it. There's no point keeping your beady eye on it and saying Dot wouldn't do this or that.' "
However, June doesn't think Dot will leave her beloved Albert Square and is planning on making a couple of one-off appearances so the chain-smoking laundrette worker can stay in Walford.
She said: "I don't think she'll go anywhere. I probably will go in and do the odd episode. I've got Mondays from the play off and I said I'm willing to go in. Not every Monday though or I'll be dead."
Source - Virgin Media
Email Post
Labels: Dot