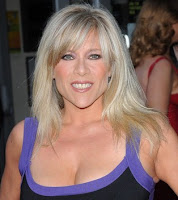 Sam Fox has announced that she is planning to make an appearance on EastEnders in the future.

The former glamour model claimed that the soap's producers have been approaching her to star on the programme for over 20 years.
Fox, 43, revealed that her ideal role would see her linked to John Altman's villainous character Nick Cotton, who was last seen on screen in June.
She told OK: "I've been asked to go on EastEnders since I was 17. First I was asked to be
Sharon's sister, then I was asked to be Peggy's daughter, then I was going to be Nick Cotton's gangster moll wife.
"I quite fancied that last one. I'll definitely do it one day when the time's right."

Fox has also been tipped to enter the Australian jungle for I'm A Celebrity… Get Me Out Of Here! this year.