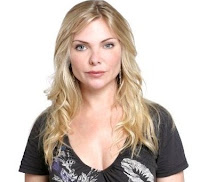 Samantha Womack has admitted that her new name is causing confusion on the set of EastEnders.

The 36-year-old, who plays Ronnie Mitchell on the show, recently took the surname of her long-term partner Mark after they tied the knot in London in May.
In a new interview, the actress has revealed that saying goodbye to her maiden name of Janus hasn't been as easy as she expected, with the transition proving troublesome for some.

She commented: "It's freaking me out having a new name! In the make-up department they spent 40 minutes working out who Samantha Womack was. They thought it was the woman who owns the dogs!"
Womack recently described her Walford role as the most challenging of her career.