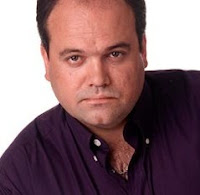 Former 'EastEnders' actor Shaun Williamson can't escape his onscreen alter-ego and is still plagued by dozens of fans shouting "Barry!" at him. Shaun Williamson can't escape his 'EastEnders' character.
The former BBC actor who played tragic, bald-headed, loser Barry Evans in the soap is still plagued by fans of the show who call out to him, even if he wears a disguise.
He said: "People shout, 'Barry from EastEnders' at me all the time, even if I'm wearing a full set of whiskers. But then there's no point moaning about it, when you think it's got me my home."

Since leaving the soap in 2004, the 43-year-old actor has been enjoying a quiet family lifestyle.

He currently lives in his six-bedroom home which is surrounded by three acres of Kent countryside with his wife Mel, their daughter Sophie, 11, and son Joseph, 8.

He said he loves living in such a green area.

He explained: "It's the space. I had that typical council-house upbringing where you just crave it.
We weren't born in a shoebox or anything, but your neighbours were right on top of you. And I am quite a loner now, since 'EastEnders'. "