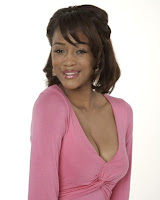 Tiana Benjamin refuses to ever ask a man out.

The 'EastEnders' actress who plays beautician Chelsea Fox in the BBC soap says she is very traditional and could never make the first move unlike her alter-ego, who is very confident when it comes to men.

She said: "I've never asked a boy out and I never will."

However, she is not short of admirers and one of the boys to fall for her charms was Daniel Radcliffe when she had a small role in 'Harry Potter and the Goblet of Fire'.

She said: "There was a rumour he fancied me. Apparently he had a bit of a crush but I didn't put him on the spot by asking."

The 24-year-old beauty also revealed she goes nightclubbing with some of her 'EastEnders' castmates to burn off calories.

She said: "I'm not a 24-hour party animal but I love clubbing it's great exercise! And I'll be the first one on the dancefloor with Kara Tointon."