Brooks: EastEnders stops me from exercising 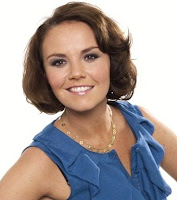 EastEnders actress Charlie Brooks has admitted that she finds it difficult to maintain her dream figure due to her soap commitments.
The 28-year-old star, who plays Janine Butcher on the BBC One drama, recently vowed that she will never weigh more than nine stone again after becoming health-conscious.
Brooks, who has a 4-year-old daughter Kiki, dropped from a size 16 to 8 in 2005 after slimming down thanks to a new diet and exercise regime.
Discussing her progress in an interview with Take 5, she revealed: "I was a size 8, but at the moment I'm a size 10, I like to give myself half a stone to play with!"
Asked if she has struggled with her weight since returning to EastEnders, Brooks replied: "Definitely. I haven't managed to do any exercise for a few weeks really because I've been so busy filming and when I do get a break my priority is Kiki.
"Sometimes I'll do my exercise DVD in the front room with Kiki climbing on my back, and usually I work out three times a week. It just depends on my storylines."
Brooks made her Walford comeback last year after originally playing Janine from 1999 to 2004.
Source - Digital Spy
Email Post
Labels: Janine

Online Slots and Casino Games said…
I think many of us are in the same position! Routine and work just seem to take over...

Well done for losing the weight - it takes a lot of committment and self discipline.