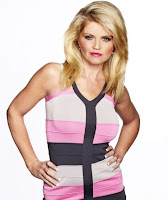 Danniella Westbrook said returning to 'EastEnders' is like "closing a chapter" in her life.

The actress, who is to return in the role of feisty blonde Sam Mitchell in the BBC soap, said she was nervous about returning to the show for the fourth time but because she is finally free from drug problems, it brings her round to where she started with the show in 1990.

She said: "I was frightened about coming back. 'EastEnders' is such a big show and I knew everyone would be watching and thinking 'Is she still a drug addict?'

"It's like closing a chapter with me because I was well when I started and now I am OK again."

Danniella previously played the role of Sam three times between 1990 and 2000.

She originally left the soap in 1993 to take on other roles, but was reintroduced in 1995. Her contract was then terminated in 1996 after her cocaine addiction was deemed to be affecting her performance.
Danniella was given another chance by producers in 1999, but again her drug problems which by this time had led to the erosion of the septum in her nose, meaning she could only be filmed from certain angles meant she was asked to leave again in 2000.

Between 2002 and 2005 the character of Sam was played by Kim Medcalfe.