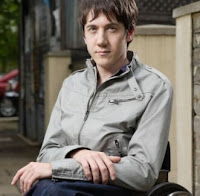 David Proud has revealed that he is thrilled by the response to his EastEnders debut.
The 26-year-old actor made his first appearance as wheelchair user Adam Best on the BBC One soap earlier this month. His snobbish character is the programme's first permanent disabled adult part.
Discussing the impact of his arrival, Proud told Peterborough Today: "The reception has been really, really positive.
"I have been touched by a lot of the feedback from people. It's been a dream response."
In real life, Proud has spina bifida, a birth defect which results in an incomplete formation of the spinal cord. The condition is also used to explain Adam's wheelchair use on EastEnders.
The star made his comments as he launched the Association of Spina Bifida and Hydrocephalus's Fit For Success scheme as part of his new commitment as the charity's patron.
He added: "The charity has been there for me and my family and given us a lot of advice and support. It is really close to my heart."
Proud has previously appeared in CBBC's Desperados and ITV2's Secret Diary Of A Call Girl.
Source - Digital Spy
Email Post
Labels: Adam