Don Gilet: 'EastEnders will get darker' 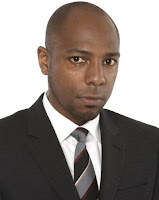 Don Gilet has revealed that EastEnders fans can expect the soap to have a "dark" tone in the months ahead.
In tonight's episode of the Walford-based drama, viewers will see the actor's character Lucas Johnson attempting to cover up his involvement in the death of his wife Trina.
Reflecting on the plot twist, Gilet told Soaplife: "When he first appeared someone wrote in saying he was a good character, but somewhere down the line something was going to come unstuck.
"We've always known there was more to this do-gooder than meets the eye. Things are going to get a lot darker in the build-up to Christmas."
Asked how sinister the situation will become, he replied: "It's going to get very dark and I hope I can pull it off, scare people and do panto at Christmas."
Gilet made his debut on the show in April last year.
Source - Digital Spy
Email Post
Labels: Lucas Trina

Anonymous said…
Look at this website dedicated to Ronnie and Danielle