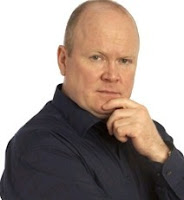 EastEnders star Steve McFadden has been trying to save his relationship with fiancée Rachel Sidwell, a report claims.
On Sunday, it was revealed that the actor had been dumped by Sidwell, who is the mother of his 2-month-old daughter Amelie Tinkerbell.
Sidwell later launched an attack on McFadden in the media, claiming that he "can't be trusted".
According to The Sun, McFadden, who plays Phil Mitchell on the BBC One soap, has since been in crisis talks with his ex-lover. She was reportedly spotted at his home in north London yesterday.
Asked by reporters if she is taking back the 50-year-old, Sidwell replied: "We'll see."
A source commented: "She says she feels hurt but won't say what has happened."
Source - Digital Spy
Email Post
Labels: Phil Mitchell