EastEnders wedding dress to be auctioned 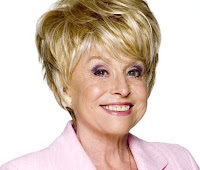 A wedding dress worn by Barbara Windsor in a classic EastEnders episode is being put up for auction, it has been revealed.
Fans of the BBC One soap saw Windsor's character Peggy Mitchell tying the knot with Frank Butcher in a lilac gown ten years ago.
The outfit, which comes with matching shoes and handbag, is now expected to generate around £3,500 when it is sold by Valentine Auctions in Cosford, Shropshire on September 14.
Windsor's dress was originally put on sale at a This Morning charity auction in 2000 and has reportedly stayed with various private collectors since then.
Valentine Auctions' spokesman Peter Andrews told Express And Star: "Barbara Windsor has a huge fanbase, so the items are very special to many people.
"There are very few items of genuine EastEnders memorabilia other than a few photographs so the wedding outfit, which includes an authentic signed card from the actress, is extremely rare.

"It is bound to attract a great deal of interest from collectors and fans of the TV series."

Peggy and Frank split on screen in 2000. Mike Reid went on to make a number of guest appearances on the programme before passing away in July 2007.