Kemp: 'I won't return to Walford yet' 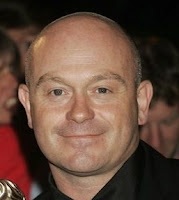 Ross Kemp has announced that he has no immediate plans to return to EastEnders.
The 45-year-old actor last appeared in the role of Grant Mitchell three years ago and has since concentrated on his career in investigative journalism.
Speaking at the GQ Men of the Year Awards, Kemp admitted that he is currently unsure about whether fans will see his hardman character again.
He told PA: "I don't know yet - you never know, do you? It depends if I'm employed, if they ask me and where I am in terms of work."But not at the moment. They seem to be doing quite well without me."

Asked about his next TV project, he revealed: "I'm off somewhere on my travels pretty soon. I can't tell you where, because of insurance issues."
Kemp was named as TV Personality of the Year at the GQ ceremony.
His screen siblings Steve McFadden (Phil) and Danniella Westbrook (Sam) recently told DS that they are keen to see him making an Albert Square comeback.
Source - Digital Spy
Email Post
Labels: Grant