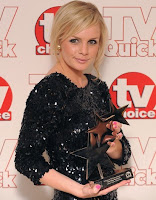 Former EastEnders actress Lauren Crace has admitted that she is still hassled on the streets following the tragic death of her Walford character Danielle Jones.

However, the 23-year-old, who won the best newcomer award at last night's TV Quick and TV Choice Awards, expressed her delight that people care so much.

Crace told DS on the red carpet: "Luckily it's reduced a little bit but people still do ask me and I suppose it's nice that people care."

When asked if she still watches the show, she went on: "I didn't for a bit - I quite enjoyed not watching it - but I'm back into it now. When I knew Joel [Danielle's dad] was going in... I started watching it again."

She added: "I love watching Samantha Janus and Larry [Lamb]'s back now. They're such amazing actors. And all Lacey's storyline that she has coming up. I think it's going to be a really good year."