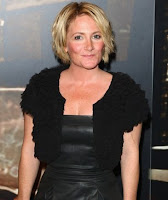 The actress who had two stints on the BBC soap playing Natalie Evans is currently starring in 'The Bill' and likes to keep some variety in her career.

She said: "I don't think I'd like to reprise Natalie. I've been acting for 27 year, so I'm really just used to moving on. I do speak to Charlie Brooks (Janine Butcher) a lot and she's having a great time being back. And Danniella Westbrook (Sam Mitchell) looks like she's enjoying her return, too."

Lucy who plays DS Stevie Moss in 'The Bill' also revealed she is enjoying the ITV police drama's new 9pm time-slot because it gives the cast a bit more freedom.

She told Inside Soap magazine: "I'm loving the style of the 9pm show now. We've put our hearts and souls into it, and had some great feedback. It's been nice to take something we're already familiar with, and make it an even better show."