Ricky to 'drop everything' for Bianca? 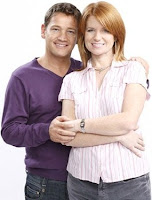 Ricky Butcher would "drop everything" to be with Bianca in EastEnders.
Sid Owen who plays the hapless BBC soap character says although Ricky has reignited his romance with teenage sweetheart and ex-wife Sam Mitchell, who recently returned to the show, he still holds a torch for Bianca, his second ex-wife.
He said: "If he knew how Bianca felt, Ricky would drop everything to be with her. He's never stopped loving her, but he gave up on her loving him back. He tried everything but she kept turning him down."
He added that the return of Sam and Ricky's subsequent shock engagement to her has driven a wedge between him and Bianca, and his character doesn't understand why the flame haired mother of his children is so upset.
He added: "Bianca hasn't taken Sam's arrival well and, being Bianca, she isn't scared to say exactly what she thinks of her. She's hurt because Ricky's with Sam and she's showing that as anger.
"Of course, Ricky doesn't understand because he has no idea how Bianca feels about him."
Sid also revealed Ricky will be married by the end of the year, although to which of his ex-wives is yet to be revealed.
Source - Virgin Media
Email Post
Labels: Bianca Ricky Sam Mitchell