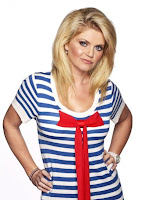 Sam will reveal next week that she’s lost her job. Not so unusual in these credit crunched times. However, there’s still plenty of appetite for Sam’s type of work but the topless model has been cut from her job because she’s too old.

Sam walked back into Walford claiming that she’s been working as an elite glamour girl But when her cousin Roxy Mitchell catches her at a grim photo shoot she has to admit that her work is more baps-out than taken out. Sam pleads with Roxy not to tell Phil Mitchell what’s been going on, and Roxy agrees – for a price.
She says: “You want me to keep quiet? I want a cut. A new top should do.”
She then sticks the knife in with: “Oh sorry, you don’t do tops do you, only topless?”
Humiliated Sam is forced to admit: “They turned me down, okay? I’m too old, I’ve lost it.
I can’t even do that. If I ain’t got my looks, what else have I got?”
Don’t be so hard on yourself, Sam. The same could be said of a lot of the Mitchells.