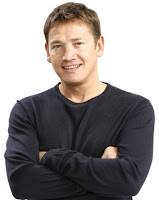 EastEnders actor Sid Owen has joked that his character should start dating a man in a bid to resolve his current love triangle.
Walford returnee Sam Mitchell and regular resident Bianca Jackson are both currently convinced that they are the right partner for the actor's alter ego Ricky Butcher.
Revealing what advice he would give to Ricky, Owen quipped: "Probably turn gay, it might be easier."
Speaking to the EastEnders website, he continued: "[He should] just stop being such a pushover, but he's such a nice guy, he can't really help it. Make a stand for himself, be a bit stronger and try to put his foot down."
Owen also revealed that he is thrilled to be working with Westbrook again for the first time since the '90s.
He said: "It's been great. I'm pleased for her, she's had a major comeback and she's handling it really well."
Westbrook will bow out of the soap once again at the end of the year
Source - Digital Spy
Email Post
Labels: Ricky Sam Mitchell