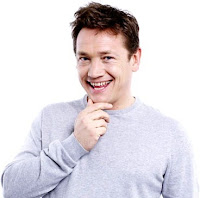 Some men would enjoy having two women fighting over them, but not EastEnders star Sid Owen.
The actor has been speaking about whether Ricky should choose Sam or Bianca and he admitted his character would probably be better off without either of them.
When asked what advice he'd give Ricky, Sid told the soap's official website: "Probably turn gay, it might be easier.
"Just stop being such a pushover, but he's such a nice guy, he can't really help it. Make a stand for himself, be a bit stronger and try to put his foot down."
However, while he may not be convinced that Sam is right for Ricky, Sid is enjoying working with Danniella Westbrook again.
He says: "It's been great. I'm pleased for her, she's had a major comeback and she's handling it really well."
Source - Holy Soap
Email Post
Labels: Ricky