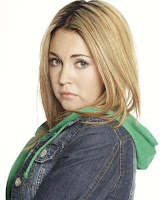 The bi-polar 'EastEnders' market worker's volatile conduct will get worse over the next few weeks as she continues to defy doctors and refuses to take her medication.

Actress Lacey Turner has revealed her on-screen alter-ego is about to strip-off in front of Albert Square residents, have a one night stand with bad boy Ryan Malloy, and upsetting ex-husband Bradley Branning.

She explained: "She enters a Miss Queen Vic competition and does a very unsettling pretend strip; then she goes back to Ryan's place. They sleep together but the next morning she makes it clear it was a one-off, and he's not happy.

"Her behaviour becomes more and more unpredictable as she continues to avoid taking her medication.

"Bradley's only trying to help by talking to her mum Jean but she feels he's gone behind her back. They row and Bradley tells her she doesn't mean anything to him any more. She's really hurt.

"I think Stacey and Bradley will always have feelings for each other as they've been through so much together."

The 21-year-old actress says things will get worse for her alter-ego before they get better.

She explained: "All I'm saying is there are lots of twists and turns to come. She needs help to get to grips with her condition and take her medication. Then she can move forward, maintain relationships and control her emotions."