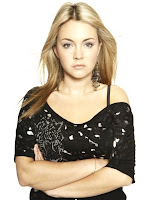 The disturbed girl swallows a fatal amount of anti-psychotic medicine in front of her terrified mum, Jean Slater.
Stacey, who suffers from bi-polar disorder, stopped taking the pills that stabilise her mood several weeks ago. She starts to think that several Albert Square residents are after her, threatens Archie Mitchell with a broken glass in the toilets of the Vic and is convinced Ryan Malloy is her enemy.
Jean, also a bi-polar sufferer, tries to reassure Stacey that her mood swings are due to an imbalance in her medication. Stacey then reveals the stash of pills she’s been pretending to take and pops them one by one.
Jean, hysterical with fear, forces her daughter to vomit the killer dose, then implores Dr Jenkins to section Stacey under the mental health act.
When Stacey returns from begging former husband Bradley Branning not to move to Canada she’s greeted by the doctor, a policeman and a mental health nurse. Terrified, she runs into the Square but is rugby tackled by the policeman and taken away.
The scenes will be shown in the first week of October.
Source - Sky Tv
Email Post
Labels: Stacey

Akaash said…
she ud rather swallow me whole and alive
Wednesday, 02 November, 2011