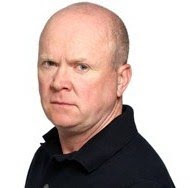 Steve McFadden has reportedly been dumped by the mother of his 2-month-old daughter.

Dr Rachel Sidwell has moved back in with her surgeon husband Dr James Green, who she originally left to be with McFadden, reports the Sunday Mirror.
A source said: "Steve is more than heartbroken by the split. Rachel realised she'd made a mistake with Steve and her husband welcomed her back with open arms."
McFadden and Sidwell became parents to Amelie Tinkerbell in June.
McFadden recently revealed how happy he was after his daughter was born.
Source - Digital Spy
Email Post
Labels: Phil Mitchell