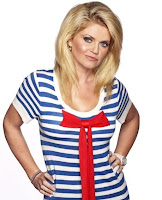 EastEnders star Danniella Westbrook has admitted that she hasn't seen any of Kim Medcalf's scenes as Sam Mitchell on the soap.
The 35-year-old actress recently returned to the classic Walford role following a break from the spotlight, which saw her battling a drug problem before focusing on life as a stay-at-home mum.
Prior to her comeback, Westbrook had last been seen in the part in 2000. Medcalf went on to take over as Sam from 2002 to 2005.
Commenting on the star's episodes, Westbrook told The Sun: "The boss told me he preferred the way I played the character so I didn't watch any of them."
The Albert Square returnee recently confessed that she was "really frightened" about reprising the role.
Source- Digital Spy
Email Post
Labels: Sam Mitchell