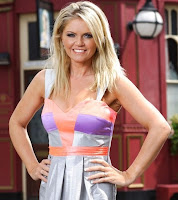 A woman has been plagued by nuisance calls from EastEnders fans after her phone number was seen in an episode of the soap.
Monday night's instalment saw Ricky Butcher receiving text messages from his ex Sam Mitchell. A close-up of his mobile phone in the scene then displayed other texts and a number belonging to real-life beautician Lisa Edwards.
Within moments, the mum-of-two was bombarded with messages from eagle-eyed viewers who asked: "Is that Sam from EastEnders?" According to The Sun, others asked for dates and sex.

Edwards reportedly received 500 calls and hundreds of text messages in the space of just two hours, with more arriving when the usual EastEnders repeat aired on BBC Three.

She commented: "The calls just keep coming and I can't use my phone for my business. Most have been friendly but quite a few were obscene."

It is believed that the texts seen on screen were ones that Edwards sent to a friend and business client two weeks ago. She has now received an apology from the BBC.

A spokeswoman said: "EastEnders owns several mobiles for the use of characters on screen. But this was a highly unusual human error."