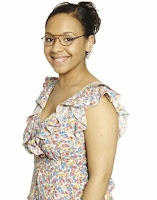 Belinda Owusu gets told she looks a lot slimmer in real life than on 'EastEnders'.

The 20-year-old actress who plays Oxford University student Libby Fox in the BBC One soap - says people are always shocked when they meet her in real life because she looks a lot smaller off-screen.

However, the star who has worked on the show since 2006 says she doesn't mind how she looks and is too lazy to exercise regularly.

She explained to New! magazine: "It's about being healthy for me. I know because of the industry I'm in, there's more pressure to be slim, but I can't really be bothered. I don't like working out and I drive everywhere."

She said: "All her clothes are bleurgh! The worst are these linen trousers that are too big for me. I worry they'll slip down!"