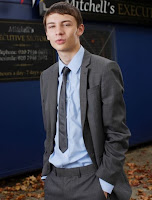 Charlie G. Hawkins feels "blessed" by his new 'EastEnders' storyline.
The actor was overjoyed when producers told him he was to be unveiled as the father of Heather Trott's baby George Michael.
He said: "I feel blessed that they've entrusted me with this and given me something I can really get my teeth into."
Viewers saw several characters in line to be revealed as the father, but for the show's producer, they always intended it to be Darren because he is so settled in his current on-screen relationship.
Producer Diederick Santer explained: "We thought Darren was a great character for this storyline as things are going so well for him and Libby, so it's the last thing he needs.
"And now we've got the question of whether he can step up and be a daddy to George. If he does, will it cost him his relationship with Libby?"
Source - Virgin Media
Email Post
Labels: Darren Miller George Michael Trott

Oscar said…
I think the writers have lost the plot with choosing Darren to be the child's father - nevermind a suspect. Since when did you ever see Darren Miller talking to Heather before she had her baby?

I don't think this storyline is realistic either which soaps are supposed to be portray and relate to.

As well as producer Diedrick Santer wanting to a cause a "stir" like with Danielle's death is preposterous.

It'd be much more realistic that if George Michael Trott's father was actually Minty. Because he was married to her and spent more time with her as well.

Other than that. It's be interesting to watch when Libby and Denise discovers about George's paternity however.
Sunday, 01 November, 2009