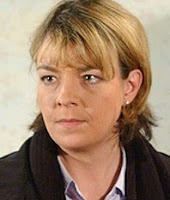 Actress Sophie Stanton has returned to filming with EastEnders as DCI Jill Marsden to head up the investigation into Archie Mitchell's murder.

The 38-year-old's character, who previously led the 'Who Shot Phil?' inquiry, reappears on Albert Square in the wake of Archie's death on Christmas Day.

With numerous suspects in the frame, Marsden undertakes the mammoth task of uncovering the identity of his killer.

A Walford source this afternoon told DS: "Marsden has a score to settle with Phil. She was never far behind Phil when he put a foot out of place all those years ago and she's back with a vengeance."

They added: "With so many people in the frame for Archie's murder, Marsden has a difficult job on her hands if she wants to pin it on Phil."

As pointed out by DS forum members, her return was hinted at in a webcam snippet on the soap's official website last month.

In the episode to air on December 29, Phil is cited as saying "I know exactly what makes her tick", before adding: "I've wriggled off her hook so many times. She's already picturing me standing in the dock."