It's an explosive week for EastEnders in a fortnight's time as Denise prepares to tie the knot with her long-standing lover Lucas.

On the eve of their happy day, Denise has a hen night at The Vic, while the lads head to Patrick's for an alcohol-fuelled knees up for Lucas.

At the hen do, Liz turns up and reassures a concerned Denise that Owen will soon be out of their hair as he's heading to Croydon. With that, the drag queen that Denise's sister Kim has arranged bursts into a rendition of 'D-I-V-O-R-C-E'.

Lucas, meanwhile, is concerned that Owen will uncover the truth about Trina's death and tell Denise what he's discovered, resulting in the wedding being called off. Confronting him in the Square, Lucas tells him to leave Walford, but Owen - who doesn't yet know the full extent of Lucas's involvement in Trina's death - threatens to expose his lies.

With that, Owen storms into The Vic and shouts at Denise not to marry Lucas as he's dangerous and was involved in Trina's death. With the music on hold, Libby demands that her father leave, before storming out herself. Owen follows Libby, as does Chelsea.

As Owen's packing to leave, Chelsea turns up on his doorstep and asks to talk. Owen's intrigued when Chelsea asks him to stop talking about Trina's death because she's worried for Denise - as she has Trina's bracelet. Curious, Owen asks why the evidence has been withheld and Chelsea reluctantly admits that Lucas asked her to keep quiet about it.

At that moment, Owen realises that Lucas was directly involved in Trina's death. As Chelsea leaves, Owen tells his mother to cancel his taxi and dig out his suit - he's attending the wedding... 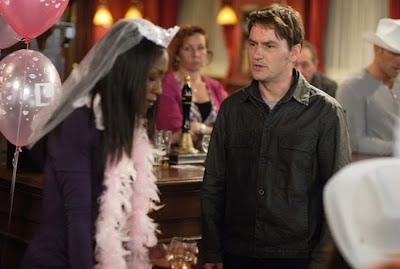 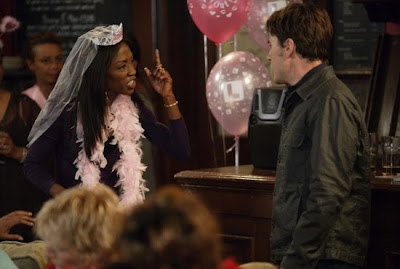