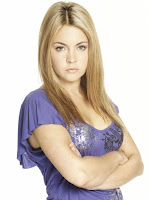 It was also noted by the mental health charity that EastEnders' "innovative and inspirational portrayals of mental distress have led to genuine impact".

EastEnders' executive producer Diederick Santer this afternoon told DS: "We've won many, many awards, gongs and trinkets in recent years, but to be told by the charity Mind, who are behind these awards, that we are making a difference is an accolade that all of us who work on the show can truly be proud of."

Leanne said…
You can contact me at
eastenderssoapblog@hotmail.co.uk
Thursday, 26 November, 2009