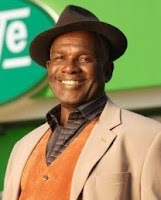 The Walford serial was named 'Best UK Drama' with a black or ethnic cast at the ceremony, which is the festival's flagship event each year.

Meanwhile, Tiana Benjamin won the 'Best UK Actress' award for her role as Chelsea Fox on the programme. She beat off competition from Rhea Bailey, who has had roles in Crossroads and Waterloo Road, as well as ex-Doctor Who star Freema Agyeman and Spooks: Code 9 cast member Lorraine Burroughs.

Speaking about the accolade, Benjamin told the soap's official website: "I'm really grateful to get this recognition, and thank you to all those who have voted, it's much appreciated."

Meanwhile, Rudolph Walker (Patrick Trueman) picked up the 'Lifetime Achievement' award at the ceremony. As well as his Walford role, the prize was awarded for the 70-year-old's long-running career in the industry, which has seen him win parts in Love Thy Neighbour, The Thin Blue Line and a stage production of Othello among others.

EastEnders' executive producer Diederick Santer said: "Everyone at EastEnders is delighted that Rudolph has received this prestigious honour. Not only is he a legend of stage and screen, and a great friend and much-loved colleague to all of us at EastEnders, but he's also - as this award shows - a cultural icon and a key figure for the black British community."

In February this year, an episode of the BBC programme featured an all-black cast for the first time in the soap's history.