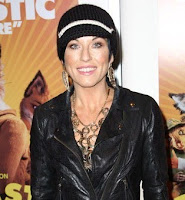 Former EastEnders' star Jessie Wallace hasn't ruled out a return to the BBC One soap.

Jessie's admission follows the news that Barbara Windsor will be leaving Walford next year after 15 years of playing Peggy Mitchell.

Talking about Barbara's departure on ITV1's This Morning on Thursday, Jessie who played Kat Slater in the soap said: "I'm really surprised [about Barbara]... I get asked every day if I'm going to go back.

"I still get called Kat every day, which I find flattering that she made such an impact but I'm doing other stuff now and it's great. I think it's nearly four years ago since I left..."

When pushed into revealing if she would ever return as Kat, Jessie said: "I don't know... I'm too scared to say anything!"

Jessie is currently appearing alongside former Coronation Street star Brian Capron in the touring production of Stepping Out.