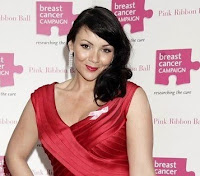 Martine, who captured viewers' hearts in the Nineties as Peggy Mitchell's daughter-in-law Tiffany, said Babs deserves some time out with her husband.

This week Barbara announced she was quitting the soap after 15 years in Walford, saying she wants to spend more time with her "old man" Scott Mitchell, who is 26 years her junior.

Martine said: "She deserves some time out with her hubby. I just say 'go for it girl! Enjoy.'"

Referring to Babs' small stature but big personality, she said: "She's tiny but she really is Little Miss Dynamite."

Martine also praised Barbara's work ethic, saying: "She's worked so hard. She was and still is a great disciplinarian. She's such a professional. She's always on time. She'll never not do her lines."