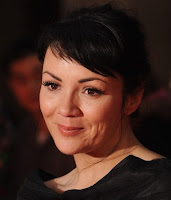 Martine McCutcheon has credited public support for keeping her happy since she found fame on EastEnders.

The actress told Hello magazine that kindness from fans helps her through periods of criticism in the media.

"But the one thing that has never wavered is how unbelievably loving the public has been towards me, to the point where I've got into a taxi, sobbing my eyes out because I've read something horrible about myself, and by the time I've got out I'm beaming from ear to ear because the cabbie has made me feel like Madonna."

The former soap star also revealed that she still has high hopes for her debut novel The Mistress, despite recent hostility directed at her literary ambitions.

She said: "I never expected to win a Booker Prize, but I worked really hard on the novel and hope people give it a chance, that it entertains and maybe makes people question a few things about relationships."

McCutcheon became a household name by playing Walford's Tiffany Mitchell for five years in the '90s.