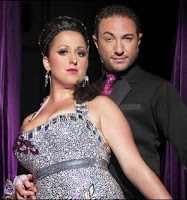 Natalie Cassidy has revealed that she is worried about how she will balance her Strictly Come Dancing commitments with EastEnders when she returns to the soap.

The actress, who is due to begin filming next week, said that she did not expect to still be in the dance contest by the time she started back at work in Walford.

She told Radio 1: "I'm going to be so busy - when I said I'd go back [to EastEnders] for a little while I didn't think that I'd still be dancing.

"I really thought I'd be gone by now. It's going to be a bit manic."

Cassidy is reprising her role as Sonia in the BBC One series, alongside screen brother Dean Gaffney, who plays Robbie, and Lindsey Coulson, who plays her mum Carol.