Palmer: 'I was bullied over ginger hair' 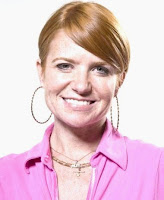 EastEnders star Patsy Palmer has spoken out about how she was bullied during her school days.

The 37-year-old actress, best known for her role as Walford's outspoken Bianca Jackson, told Newsround that she was taunted over the colour of her hair from the age of six.

Palmer revealed: "I was picked on because I had ginger hair so I was obviously different from all the other kids. I didn't have a lot of friends in school and I felt really scared. So I would lie to mum and tell her I felt ill all the time.

"Although I didn't realise it at the time, there was nothing wrong with me. Now I know I can have freckles and red hair and be who I want."

She continued: "Being bullied was the most horrible time of my life. It was my acting that got me through. I got a part in a West End show where I made loads of other friends and there I realised not all children are bullies."

The soap star added that the experience made her a "stronger" and more "compassionate" person as she would now always help a person who is being bullied.

Palmer reflected on her school years for a Newsround special about bullying. JLS singer Aston Merrygold and boxer Joe Calzaghe also took part in the programme.